I’m an old country girl, so the axiom “the watched pot never boils” is stuck in my head this morning when looking down at my new litter of six toy and miniature Australian Shepherd puppies (aka Miniature American Shepherds) born December 19, 2013.

I bred my black tri, Fancy, to my blue merle male, Swagger, back in October and the excitement has been building for the puppies to be born.  Even though I breed my girls once a year, having a litter of puppies has not become old hat for me.  I get nervous because I love my dogs and would never intend to jeopardize the health of my female for a litter of puppies.  When I’m nervous, I chatter, so I chatted online with friends the last three days as the time I had calculated for the whelping came.  Luckily, I have three really good friends that share my excitement and in some cases, remind me to breathe and relax a bit!!!

Fancy has a very predictable cycle and has had three litters of puppies in mid December from 2011-2013 within three days on the calendar of each other.  After taking her temperature early yesterday morning and it being 98.2, I knew birthing was eminent within 24 hours. However, when she started the normal shaking and quaking about 10 am and then no signs of puppies, I started to stress “a little” and gave my goto whelping vet a call.  She wasn’t concerned and said call her back if no puppies in 24 hours.  Okay.  Well, about 4 pm, Fancy’s water broke, or in dog terms, one water broke which usually indicates a puppy is in the birth canal and you should be seeing a nose or back end within 10 minutes.  Nothing.  She laid down and decided to take a nap while I paced and texted my friends.

So, what did I do, at 4:30 pm I called my vet again and she assured me that things were fine.  Just take a nap and relax.  My husband was making peanut butter balls for some of his friends for Christmas, so I ate a couple, thinking sugar was the perfect medicine.  Six pm passed and 7 was on the clock and no puppy.  Hmmm, the 10 minutes was long gone and I begin to wonder if a little ground hog baby that might have been in that sac of water was laying crossways in the birth canal holding up the train.  Yes, I called the vet again, after hours, and pleaded with her to meet me at the office just to be sure things were okay.  Dr. Ross at PeWee Valley Vet is awesome and I could see her smile on the other end of the line and she told me to meet her there in 15 minutes.

I packed up Fancy into a crate just in case, loaded my warming box for puppies, just in case, and took off.  After an ultrasound on that cool equipment that Dr. Ross has, she told me not to worry, relax, the water I saw was a bag without a puppy that bitches often have.  She said nature has a way of opening the birth canal for the real puppies with that bogus bag of water sometimes.  She also told me to expect puppies within the hour.

8 pm, 9 pm, 10 pm…..no puppies.  Fancy was panting and doing the weird stuff that girls do when they are trying to birth a baby, but no babies.   By then, I was like….come on Fancy, push those pups outta there.  Oh, and I gave her ice cream which I always do when she is whelping because it gives her some sugar for energy, some calcium to help her contractions and helps cool her down from all the panting.

Just before midnight, I woke Paul up from his slumber (haha) and told him to get downstairs because I was seeing a puppy bubble.  Wooohoooo!!!  A bubble with a puppy inside!!!!   And, headed out into the real world!!!

From that point on, Fancy delivered quite naturally and without any kind of issues, five little mini or toy Aussie puppies.  Three of them (all boys) were merles and one black tri girl and one black tri boy.  I remembered the 2012 surprise puppy, so I started to straighten up the gear but I didn’t totally put things away.  I gave my good girl a smooch to tell her thanks for her hard work and walked over to my couch which has its back to the whelping pen to send a couple of emails to tell my friends that all was well.

Five minutes at the max, I walked back over to the bed and saw blood on the pad.  Ah oh, I thought Fancy had done a number on somebody’s belly button since she is a licker and can get pretty wild with her cleaning duties.  I picked up a little black tri and saw it’s button was a little red so I pressed a Quik Stop pad on it.  It was kind of wet and I thought, oh Fancy, you lick too much so I rubbed the puppy a bit with a cloth and stuck her on a nipple to get some milk.  Remember, it is 3 am.

Then, I looked down and what??????  I’m counting six puppies and before there were only five!!!  Fancy, you tricked me again and gave us a surprise puppy.  How did you get that little girl birthed and cleaned up in the time it took me to type a short paragraph email?

So…the night ended about 3 am on December 19 with six gorgeous little puppy dogs.  Swagger is a daddy!!!  Izzy is a grandmother!!!  And, I’m happy to have another sweet litter on the ground on this Full Moon in December 2013.

Today is photo shoot day and luckily, the puppies were fairly cooperative.  I was playing around a bit with my camera with lighting and poses and got some fairly good shots between eating, playtime and naps.  I admit photographing 4-5 week old puppies without someone to assist requires some time and patience.  Let’s just say I had a nice number of “not so good” ones and had to work in short intervals.

The eye color is fairly distinct in these photos with the exception of Shadow and I had him facing the light so his pupils were dilated.  He and Brave both have blue eyes.  It is still possible that Tardy might be partially blue which sometimes happens with merles.  Their eyes carry the same merling pigment as their coats and can be multi-colored.

All but one of these puppies has deposits, and it’s still a mystery who is behind Door #6! I will revise the Blog as folks make their selections.  The excitement is building!! 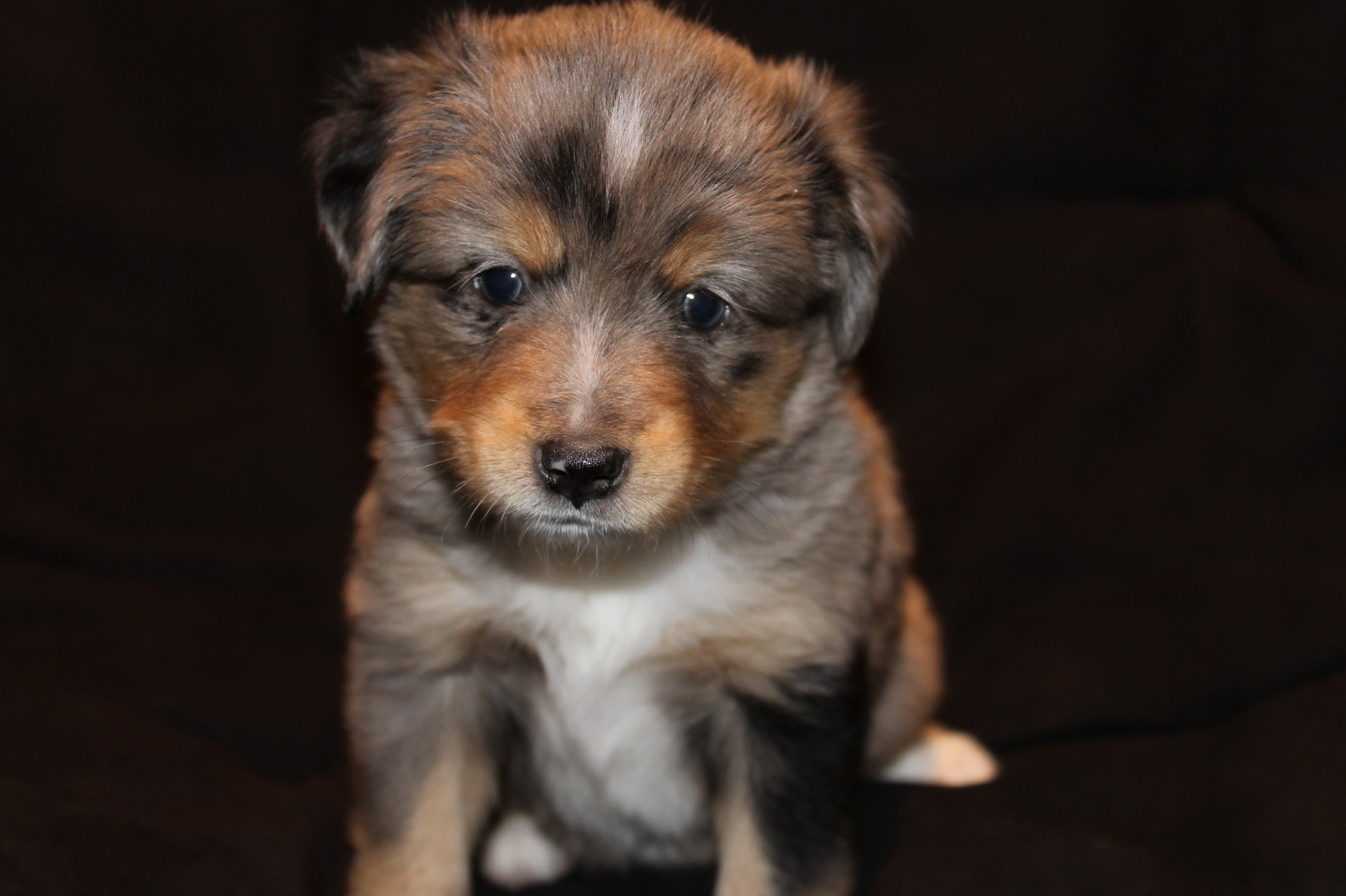 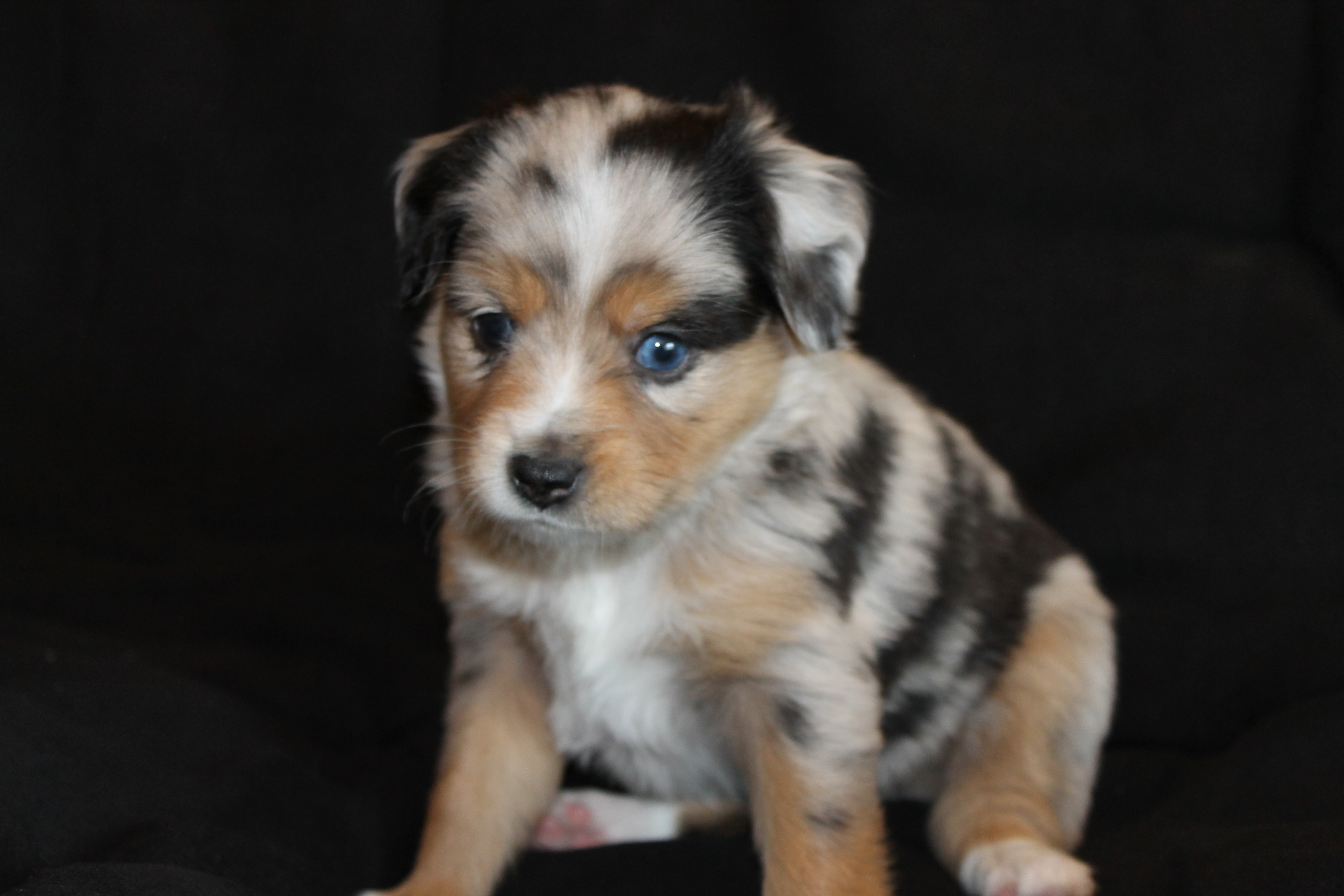 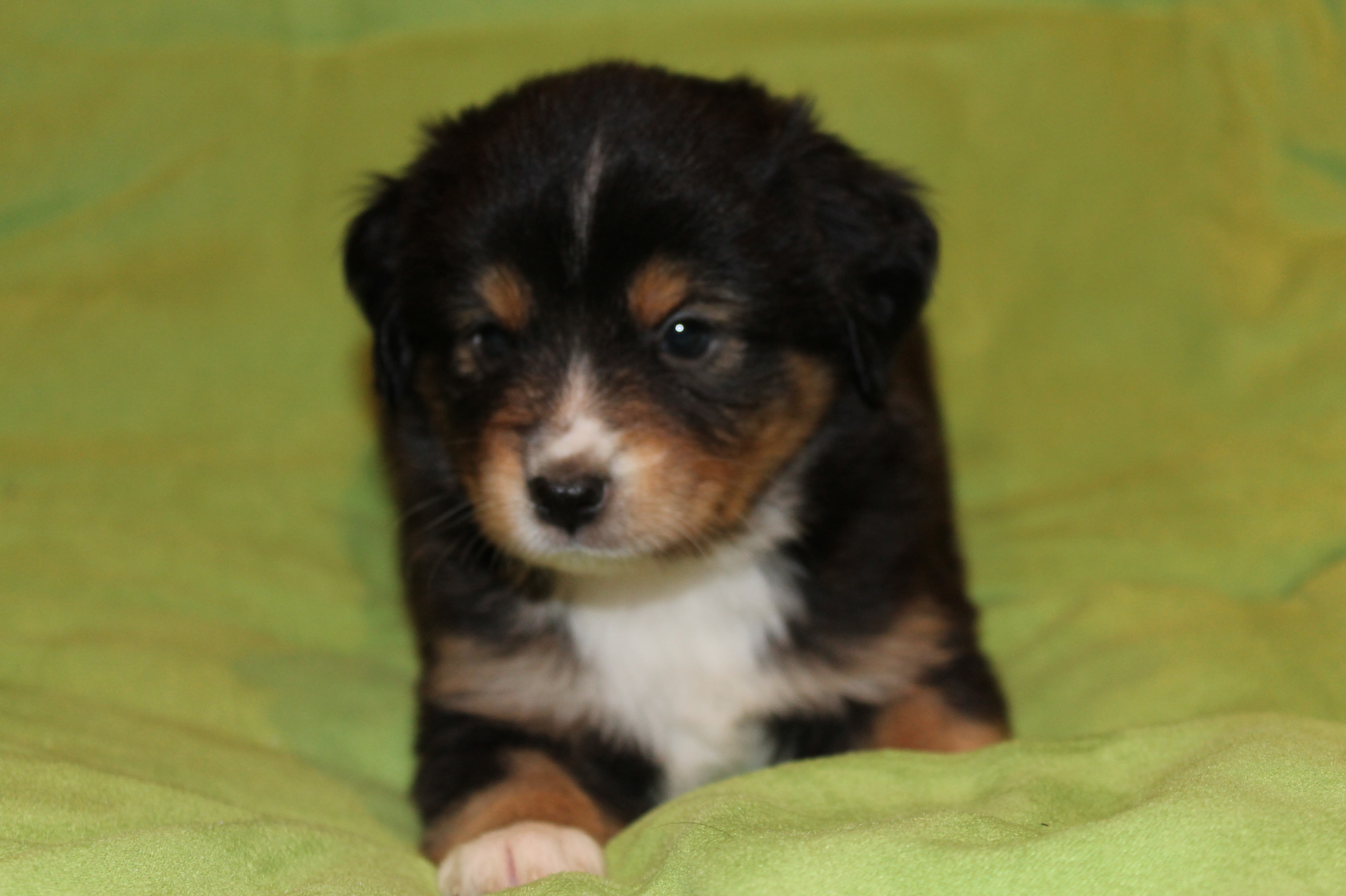 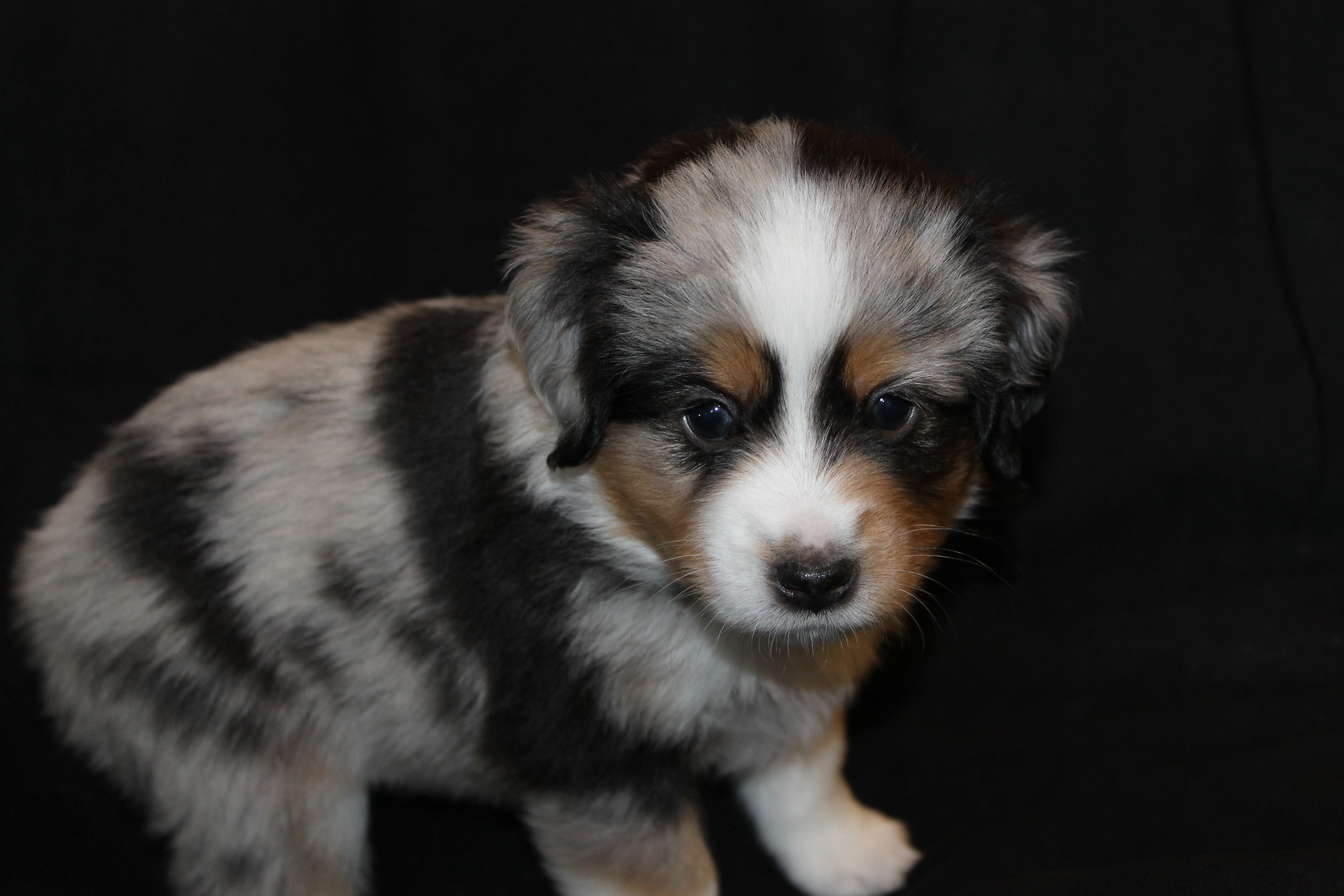 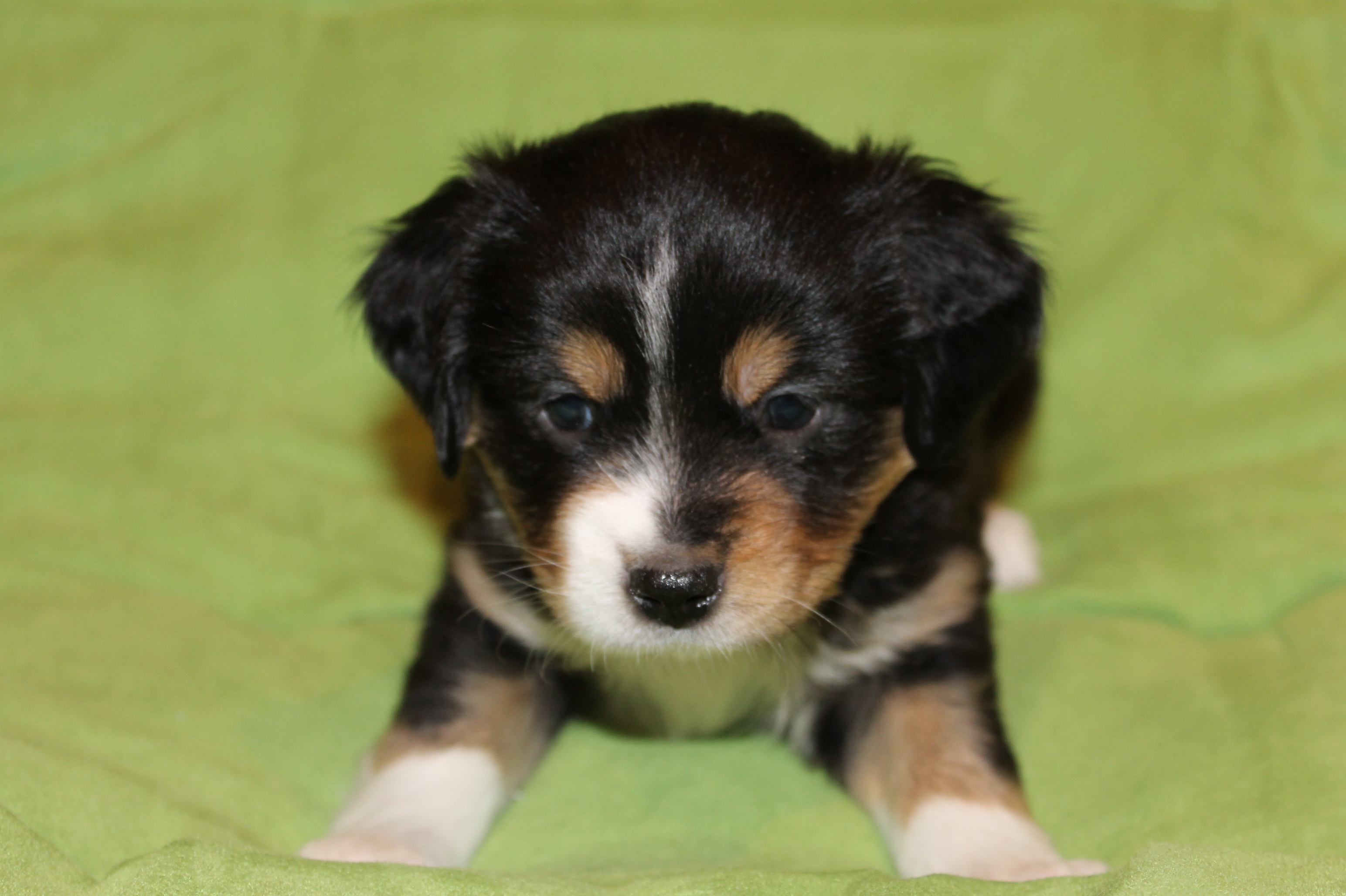 Check out the resemblance of Fancy and two of her daughters, Rosie and Nika. Fancy is the larger of the three with the full white bib.  Rosie is the red tri female, which was my keeper from her 2011 litter. Fancy is registered with National Stock Dog Registry (NSDR) as a Miniature Australian Shepherd and American Kennel Club (AKC) as a Miniature American Shepherd. I wanted to get some candids while Nika is visiting us this week.

Since Fancy is a black tri female, it was not obvious until she whelped Rosie if she carried the “red” gene.  In order to have red puppies, both the dam and the sire must be red factored and black is always dominant in this breed.  If one parent is merle, then that opens up the crayon box!  A blue merle puppy is a black tri dog carrying the merle gene and a red merle puppy is a red tri dog with the merle gene.  Detailed information is available online for the correct genetic terminology.